B Polar is a visual work inspired by Gogol's "Crazy Lists", the story of a gray clerk who falls in love with his manager's daughter, a love that becomes obsessed and ignites the bipolar mental illness hidden in him. The work deals with the influence of the modern world on the human psyche and the increasingly blurring boundary between sanity and insanity.
Inspired by Gogol's classic story, the mental illness that develops on its symptoms is drawn on stage from the eyes of the person experiencing it. All this is done without words through movement, video art, music and lighting in the stage and unique language of the Eagle Ensemble. About the piece: Who has not ever felt that he is going crazy? Who among us has not ever felt that the crazy world we live in is driving him crazy? Gogol's "Lists of a Madman" is among the first texts in the literature dealing with mental illness from the patient's point of view.

Although written in the late 19th century, in the eyes of Gogol's absurd, Kafkaesque and cruel world it reflects our chaotic and stressful reality today. A reality that pushes man to the edge. We chose to tell a story without text, out of a sense that the words had been eroded, lost their meaning. We were looking for a pure, true, primordial expression from which to start and build a new stage language, one that would convey the full complexity and depth inherent in the undermining of a person's soul. Duration of the play: 55 minutesCredits: Director: Yoav Michaeli Set design: Avi Shkuy Lighting design: Uri Murgericha Musical and original music: Amir Grumman Costume design: Ahuva Arzoidau - Art: Eli Leukredit Photo: Sally Petel. 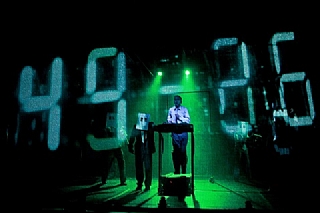